I returned from a solo trip to Mexico 5 days ago.  I went to be part of the Dia De Los Muertos celebrations (day of the dead). 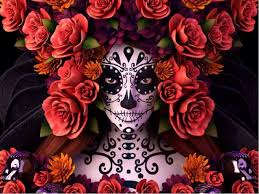 It turned out that this celebration was the least impactful part of the trip.    I’ve been struggling to put into words what I discovered, but how do I explain that I discovered ME?

Here is what happened.

I chose an American hotel chain, assuming I would meet fellow American travelers.  I also knew that the staff spoke English, so the fact that I spoke little Spanish wasn’t important.  One tiny little glitch – there were no other American travelers.  Or if there were, I never saw them.  I was alone. Really, really alone.

I had a momentary sense of panic when it became  clear that I would not meet fellow travelers.  All of the stories from my childhood came flooding back.  If I was alone there was something wrong with me.  Maybe I was depressed, maybe nobody liked me, maybe I was weird or perhaps I was simply a loser.  These were the thoughts that took over my head, invaded my soul, destroyed my sense of belonging in this world.

Fortunately, this only lasted about 10 minutes.  I quickly realized that it is amazingly freeing being alone!  For 6 days, not having to speak to anyone, except to order a margarita or ask if I was at the right bus stop, was just the nudge I needed to find myself.

I can’t remember every having such a profound feeling of serenity and wholeness, which I didn’t really understand until tonight.  Tonight I was at work, and everyone who came in wanted to know how my trip was.   As the night wore on I realized that to each of these people I am “something”.  Some people know me as the studio facility manager.   Others know me as the band mother, the sick person,  the divorcee, or the klutz.  Everyone I know has a story about me.

Mostly those stories are created by me, because, well I have to be something, right?   Turns out this is Wrong!

After 6 days in relative silence I realized I could put all of those stories away.  There was no need for them.  No one cared “what” I was, and I didn’t care “what” any of them were. I was just a girl on the bus looking for a beach, or the right souvenir.  The rest of it didn’t matter.

I am still processing this experience and the impact it had on me, so I’ll stop here.  I’m not sure how to describe how this effected me, I only know that it did.  Profoundly.  I feel 20 pounds lighter and, as one of my friends said, my dimples are larger than they used to be (important because as a child I was known for my dimples; as an adult I seemed to have lost them, something I never understood).

In the next few weeks I will try to put into words the heart of my message, but first I have to figure it out!

In the meantime, I highly recommend solo travel!  It’s cheap, you can do exactly what you want to do and, if embraced fully, you might reclaim your soul.